Gold
Not what you were looking for? Check Leonardo (disambiguation)

Leonardo (Vision Quest) is a playable character in Legends.

Injured in a battle between Shredder, Leo must learn to lead in both body AND spirit. Leo's road to recovery has become a bumpy one in his weakened state. He must become like the wind, not allowing anything--including his defeat--weigh him down.

Leonardo (vision quest) is an excellent fighter, he has high accuracy, high dodge, and high speed. But his max health and defense is low meaning that he is vulnerable against strong enemies.

Leonardo (vision quest) basic attack is capable of dealing damage over time against enemies if he does critical damage, and he has 2 area damage abilities against all enemies, his 2nd ability causes to decrease their speed and his 5th ability will cause to block enemies healing and dispelled positive effects. This makes him the most useful fighter that deals damage to all enemies at once gives them negative effects and he is useful against enemies with their cunning trait.

Vision quest Leo has the ability of support which gives their allies armor and increase speed which is very useful in tough battles but it only last for 2 turns.

Can Be Found In[] 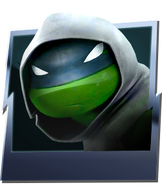 Leonardo (Vision Quest)'s character icon. One can notice the frame is not gold.

Leonardo (Vision Quest) performing his Rain From Above attack. 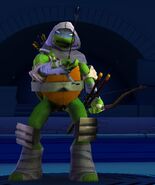